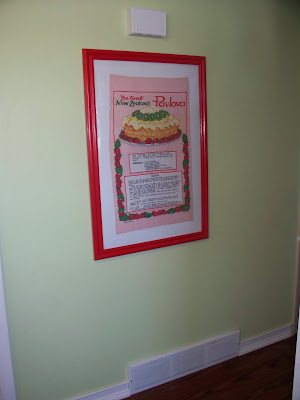 The frame is done, the tea-towel is in it, and it is up on the wall! After a setback last night (my darling hubby decided that a 24 x 36 inch piece of glass on a wall that kids bang against all day isn't such a good idea, and I reluctantly agreed) I had to find a new solution. Turns out that we had an old poster frame with a perspex sheet instead of glass that was exactly the same size so I just swapped them out. It has a few scratches on it, so I will eventually get another one, but there are tons of poster frames in the thrift stores for cheap cheap cheap so I'm not too worried. I love, and I mean LOVE it! The red was a good choice. I couldn't decide between hot pink, green, or red, but I think the red is perfect.

I know that the tea-towel isn't perfectly straight in the frame, but it's as good as it's going to get. 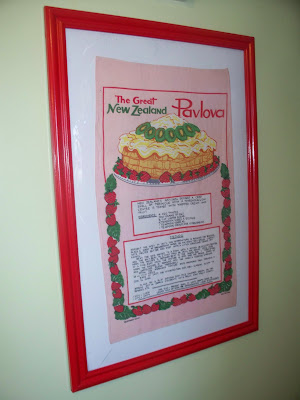 The tea-towel was horribly shaped and I washed it and blocked it to dry as straight as I could, but that thing is just shaped funny. But hey, I figure it just adds to the quirkyness of it!

I also did another, smaller frame, for a little print of a painting done by an artist in Salt Lake City. 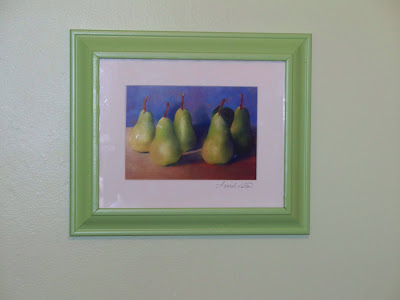 I picked it up from the artist at the downtown Farmer's market when we lived there. I have a thing for all things pear, so I just had to have it. The green is much better than the brown, don't you think?! 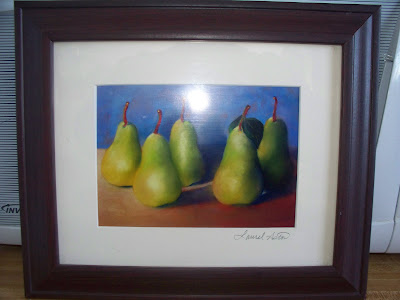 OK so I know the green is not everyone's taste, but it's mine! 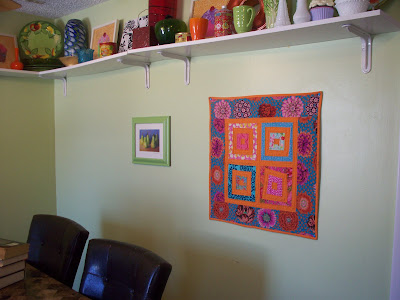 These were very cheap fixes. $8 for the large frame and $3 for the red can of spray paint. I already had the small frame, so it was $3 for the green paint, plus the can is almost full.

I think I have the spray paint fever now. I am looking at everything around me wondering hmmmm how would that look spray painted?!! 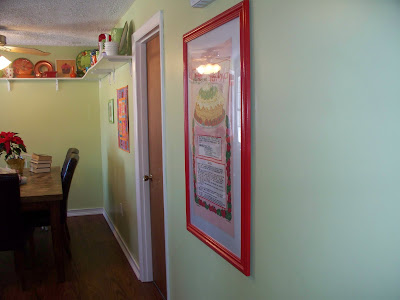 It looks fab and as we know not all 'pavs' turn out looking perfect but the taste is great, so is yours.
arohanui
Miche'le

Hey Jo! I LOVE that red and pink together. It's a great combo, right? Missing your face right now! Love you...Grandma

I love your colours. That frame is the perfect colour, and the tea towel a bit like us Kiwi's we can be a bit quirky and have a slightly warped sense of humour. And to think you have the pavlova recipe right there on the wall!

Isn't it funny that when we have to child proof, we even have to do the Walls? (Been there, done that). The framing looks great, and the red is perfect.

You did a great job of the painting and the frames. Gotta love a pav, our Christmas dessert this year.

Love the colors! Especially the pink and red. Well, and the green, too. LOL!

When my father was dating my mother, every time he went to her house it seemed that my grandmother was spray painting something in gold paint. I think a can of gold spray paint was his first Christmas gift to the woman who later became his MIL.

Brilliant, brilliant brilliant. I hope you are tucking into a pavlova as we write

It's gorgeous and so handy if you get the urge to make pavlova. I do like the red and the green, they are both so cheerful and fit right in with your beautiful and colorful wallhangings.

I like the red and the green frames and the great thing about decorating with red and green is you can find great decorating items in these colors after Christmas.

Your DIY is DE liciously lovely!

Have a merry and bright Christmas.

Well...YES YOU ARE!!! Yes you are
oh such a wonderfully creative gal!!...Ha...looking around to spray paint everything....Ha!!
Hey...and I'm luvin' your progress
on your wall of quilts...hhhmmmm...I think maybe you could fit in about 60 more...!!!

How pretty, and what a great idea. MERRY CHRISTMAS