A different kind of Applique

Wow has it really been a month since my last post? Time flies!

So I spent this weekend doing a different kind of applique...fabric decoupage. It's still applique in the sense that you are applying fabric on top of something, and it sure was fun!

It all started when my daughter decided she didn't want this bookcase anymore. I wonder why? 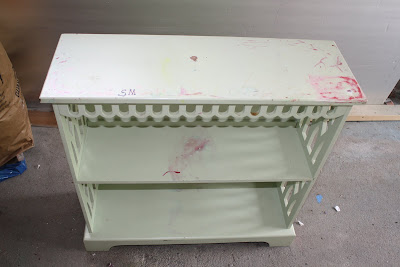 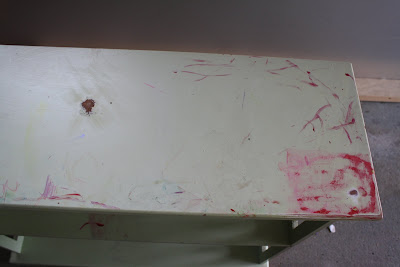 Over the last few years it had become covered in nail polish, permanent marker, lipstick, scratched, you name it. My first thought was to give it a good sanding and paint it. Then I thought about how much work that would be given how damaged it was, and I began to wish there was a way I could just cover it up. Then I thought, hmmmm people decoupage things like this with paper all the time - why not use fabric?! So I grabbed a bunch of scraps, a bottle of Mod Podge and went to town! And I LOVE it! It's now in the kitchen/hallway with my cookbooks on it. 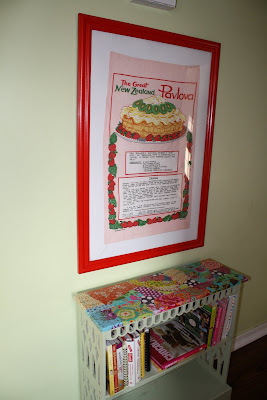 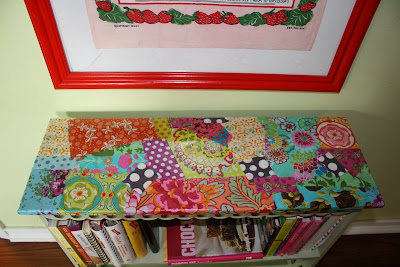 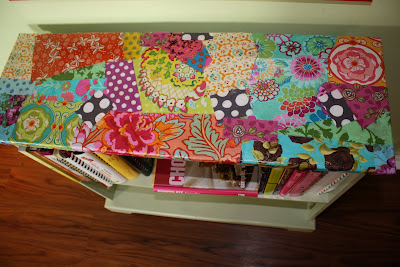 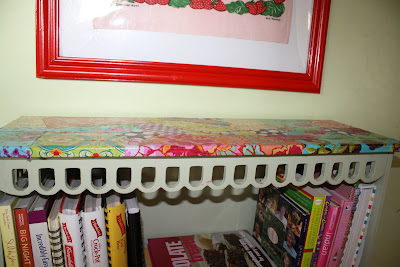 My daughter is quite in love with it now and wishes she had it back. I told her that when she can show me that she can look after things I'll think about it:)

So since that project was a success I started to get the Mod Podge fever and was looking around for something else to fix up. I had this old cupboard that I got from a friend when she moved a few months back. (sorry, it's the only 'before' photo I could find - I was using it to hold my fabric scraps while I did the bookcase!) 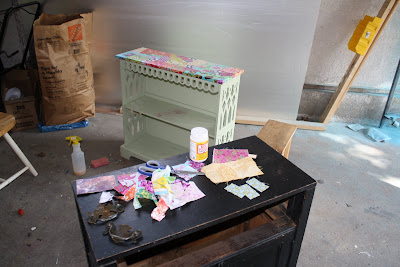 It was old, black, (yes I know black is good, but this was definitely past it's prime!), banged up, broken, and covered in dirt and cobwebs (it had been in my garage) but I had kept it because it's just a good size to have and I could see the potential in it.

So after a good cleaning, I fixed the broken drawer and back and bottom of the cupboard, primed it, and spray painted it green. I also bought new knobs for it. But it still needed more! I distressed all the edges with sandpaper, and I found a piece of Anna Maria Horner Garden Party fabric that I have been saving because it's one of my favorite prints ever, measured, cut, and pulled out the Mod Podge again! Several coats of Mod Podge and spray varnish/sealer later, I have a gorgeous new cupboard in my living room! It's housing all our board games and takes up less space than the coffee table I had there before. 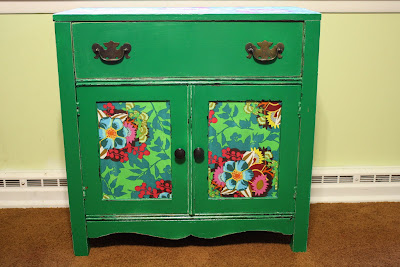 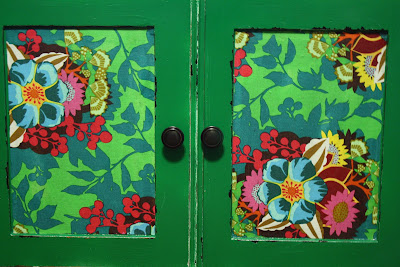 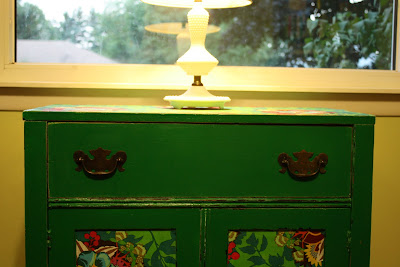 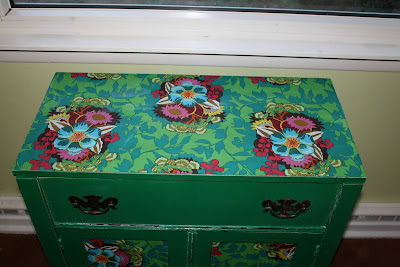 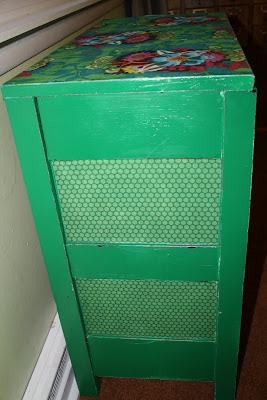 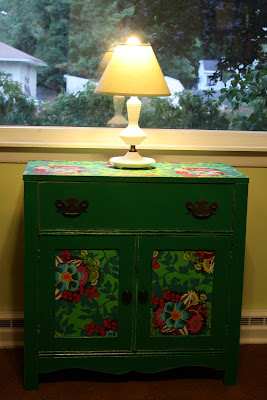 So you see, applique doesn't always have to involve a needle and thread!
Posted by Joanna at 11:36 AM

LOVE IT! Really I do. Maybe I'll do that to the top of the vanity I'm refinishing for my room. I just finished spray painting the inside of the drawers blue. Will post later...you're so clever.

what a great idea... my daughter should meet yours, they have similar 'decorating' styles!

Oh my gosh, how cute it this! What a great crafty recycle, on both pieces! Love them

Joanna, FABULOUS!!!! You are a double genius, my friend! I luv it! Well done! You are definitely making my skirt fly up! Have a great week!

Your handy work is very good. Love what you did to bookcase and cupboard. What an excellent idea!
Elzaan

I LOVE it! You did a super job on both projects and were completely inspiring to me tonight. I'm wondering how many things I've tossed because I couldn't see the potential in how to fix them up. Thanks for inspiring me...I'm gonna walk around my house and look for a piece to spiff up!

You are just too darn creative! Great looking pieces.

I would take the green over the black any day. It is great you were able to reuse. Very creative.

Incredible!
I'm so inspired - I just love these 2 projects. I have to go look around for something to fabric applique' quick!
Thanks -

Love it! What a great idea. And the green cabinet is gorgeous with the fabric you chose for it!!

Absolutely fabulous! I may let my daughter "refinish" some old pieces of furniture this way!

So, you are back! Welcome!!!
Thought something bad had happend to you! And I missed you!
I really liked your refinishing!!!
So creative!

great idea! I've been wanting to do this with my daughter's dresser!

LOVE the white piece, so darling, I want one now :)

Home Is Where The Heart Is said...

What a great way to update a piece of furniture. I love it!

Fantastic results...I love the first one and the detail of the shelves is so pretty that it marries up with the appliqué top perfectly. Glad you managed to give it a new lease on life :o)