Look what I won! 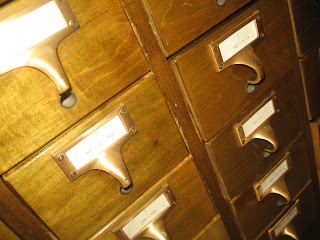 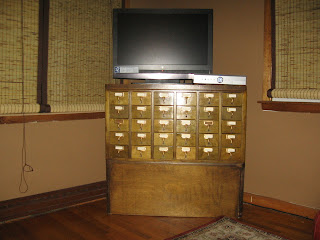 Today was a very exciting day. I received a call from the local library saying that I had won a silent auction they had a couple of weeks ago. What was I bidding on? One of their old wooden card catalogs! They had 4 to bid on, and I won mine for the grand sum of $55. At the time I thought it was a lot of money to bid, but after looking online and seeing that other libraries are selling theirs for $200 plus, I think I got a bargain! The librarian was telling me that they used these until 2001 and that they think they may be the last library in the US to make the change to computers. I am so happy to have a piece of local history in my home!
So I picked it up (had to take the 2 middle seats out of the minivan for that!) and it now is in my living room with the TV on top of it! We didn't have a nice entertainment cabinet and just kept putting off getting one. Now I know why - because it was foreordained in heaven that this card catalog was to be mine mine MINE! OK that's a bit dramatic, but hopefully you can see how excited I am by it!
It will house all my quilty stuff that I use while quilting in front of TV. And maybe a shoe or two, according to my 6 year old daughter.
I called my MIL and told her about it and the first thing she said was "Ooooh you can put all your fat quarters in it"!! Is that a wonderful MIL or what?!! And yes I think it will be perfect for some fat quarters!!
Posted by Joanna at 7:15 PM

Hi and welcome to the ring! What a great won you've got. Its a really perfect furniture for all those little quilt equipments and fabrics to create a system. Congratulations

I am jealous! Wish I had one of these to put fat quarters in!

what an amazing find!! WOW!

Oh, I am completely jealous...I love little drawers with a passion. What a bargain - congratulations!

I like the idea of quilty stuff in the drawers. Tools, fat quarters, whatever! I would love to have one of those cabinets.