How To Replace A Button Tutorial

I was saying to my hubby today that I didn't know what to blog about and that the only sewing I had planned for today was to replace buttons that had come off two of his shirts. I told him that I guessed I would just take a photo of that and call it a day. He said, "Why don't you do a tutorial on how to replace a button?" I laughed. I mean, really? What quilter needs a tutorial on something so elementary as that?! He told me that you never know who might need to know how, and perhaps a mother would tell her college-bound son to look at it!

So here, in all it's basic glory, is how I replace buttons on my hubby's shirts.

1) Find a button to use. If you are lucky, the shirt will have a spare button or two sewn on the wrong side somewhere. Just like a car has a spare tire! Sometimes it's near a side seam, sometimes on the wrong side of the front facing, and usually near the bottom.

I was lucky with this first shirt as it had a 2 spares on the back of the front facing. Phew! 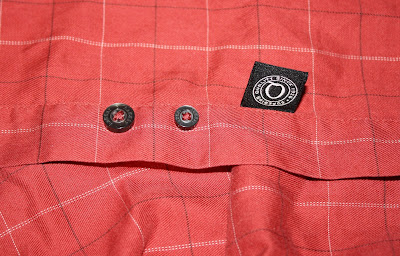 Get a pair of scissors and carefully cut the threads holding the spare button until it comes off. If you don't have a spare, go down to number 7 to see what to do.

2) Clean up the area. You will probably have a little bunch of threads where the old button used to be.

Just snip these off so you have a nice flat surface to attach the new button to. 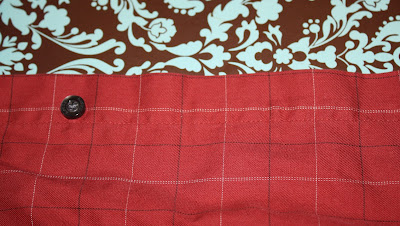 3) Pick your thread. Have a look at the other buttons already on the shirt.

What color thread are they sewn on with? Try to use one as similar as possible.

4) Thread your needle. When I applique I use a single thread. But when I sew on buttons I always use at least a double thread. Knot your threads together at the end.

5) Start sewing on the button! Place your button where the old one used to be and start sewing it on, first coming from the back to the front. 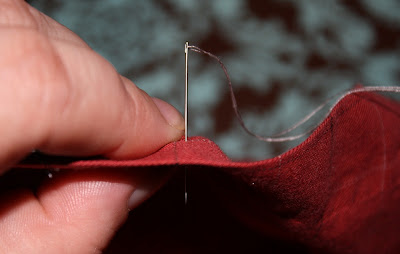 Have a look at the other buttons to see what pattern of sewing is used. Some buttons will be sewn in a criss-cross pattern, and others will be in a simple dash. Do yours the same way! 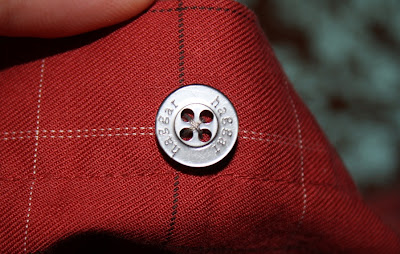 6) Finishing up. When the button is secure, take the needle to the back and take several tiny stitches on one spot, snip the threads and you are done! That wasn't so hard was it?!

7) If your shirt is like my hubby's second shirt and doesn't have a spart button you will need to find one! I have a box of old buttons that I use just for this purpose.

I pick up old jars of buttons at thrift stores and garage sales. I found one for his second shirt that was almost a perfect match in my box! 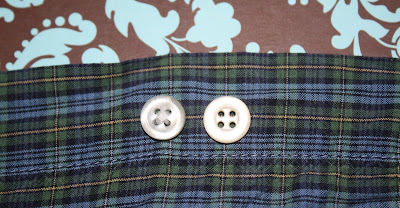 However, if you can't find a good match or don't have a button collection, you can always go to your local craft store and buy one. Or look at other shirts and see if they have a spare. Or ask your neighbor. Or steal one from your kids'/brother's/roommate's clothes. OK not really, but you get the idea!
Posted by Joanna at 10:30 PM

Thank you for fixing them Joanna! Also I learned something, I didn't know about sewing the button the same way.

Excellent tutorial, excellent! I read it in complete fascination thinking all the while that it could have used more pictures. like close ups of the threads and how you criss cross them. WHY? Because this teaches "independent living skills" to visual learners.
Ahem.... I might have to make my own button replacement tutorial for GP. I think this idea is just brilliant. I am so dead serious, you have no idea. Thanks for posting this. You're so smart...

Great tutorial. It never ceases to amaze me the number of well educated professional women I have worked with that take button repairs to a tailor to do for them because they do not know how!

I work part time in our local fabric shop - we also do alterations to clothes - I am constantly left speechless at folk who ask us to sew on buttons........doubt they would read blogs either..lol

Thanks! to you & your hubby for the great tutorial! I also enjoyed reading it all! Don't you just love a button collection?? :-)

Just last night at a crop party, my friend Mia & were talking of how we love to knit and crochet, quilt like crazy, and read our Kindles...we wished we only did 1 thing! It is tiring at times just to choose what to do, but how can we stop? Then a friend next to us told us that she could not even sew on a button, could barely thread a needle, and she promised us that this was true. I am sending her this link right now. ~a

oh goodness. I am sending this link to my son. He lost ALL the buttons on his shorts yesterday and was asking me for safety pins..lol

I sew all my buttons on using my applique foot and my sewing machine.. much faster...

If sewing by hand for some reason, I start the needle from the front of the shirt,then add the button and then back up into the button.. this hides the knot under the button...

As others have said it is amazing the number of people who cannot sew a button. I once worked with a woman who took all of her clothes, ALL, to the cleaners for laundering a d dry cleaning and told them to do any necessary repairs because she did not even know how to do laundry. If you need a button and cannot find a close match you can take one from the bottom below the tucked area of a shirt and replace it with a slight mismatch and no one os the wiser. It means sewing 2 but looks better.

Just found your fun blog--love your appliqué and textile work. I, like others commenting, am surprised at the need for a button tutorial. My fabric stash is from used clothing found at the flea market (in Tunisia), so I've been cutting off and saving the buttons for years and years. Have them organized by color. I think I could match just about any button!
Thanks for sharing! I'll stop by again.
Best, nadia