As my 94 year old grandfather used to say to me when I was a young girl, "There are as many days left in the year as there are noses on your face!"

As soon as I press "Publish Post" the little ticker on the left next to 2011 will say 365 and I will have completed one of my biggest goals ever!

I hope you have enjoyed the journey with me. I have had a love/hate relationship with it - I love it when I have something interesting to post about, but then I hate it when I don't have anything interesting to say and have had to still post! Thank you for reading, thank you for sticking in there, and thank you for all the encouraging comments - they have meant SO much to me! I tried to reply to everyone when they commented, but I know some days I missed doing that, so for that I'm sorry, but please know I read every single comment and they made me smile!

For my last post of the year I want to write about the kindness of quilters/sewing folk. (It's rather long, but hang in there!)

Back on October 2nd I entered a trivia contest on the Z&S fabrics Facebook page, and lo and behold I won! The prize was a $50 gift certificate to their store. I was so excited as I had bought from them before and knew they had the most amazing prices on quilt fabrics around. Well the certificate didn't come and didn't come, even after repeated nice friendly emails from myself. I knew the son of the business owner had taken over the business and was, shall we say nicely, a little "out there"?! His posts on Facebook were something else! Hugely entertaining though!

A couple of weeks ago a mass email went out from him saying that the business was closed. Done deal, goodbye. It wasn't really shocking - I was surprised that anyone was still buying from him - he seemed so crazy! However, I was left wondering, what about my $50?!!

He had said in his email that the other company's stores, Sauders fabrics and Zooks, both in Pennsylvania were staying open and honoring outstanding orders.

I emailed them and explained the situation. They said that yes they were honoring the obligations and if I could just send them emails exchanged proving I had won, then that would be great.

I searched and searched and found a couple of emails but neither of them specifically mentioned me winning. One was the email I sent with my answer to the trivia question, but nothing saying congratulations, you won! I still forwarded them, not expecting anything at this stage. I received an email back saying they would take my word on winning and to come to the store anytime to claim my prize! Great! Except....I live about 8 hours away and they don't have an online store!

I did however know that they carry Kona cotton solids, a staple at their stores, so I said I'd love it if they just sent me a random selection of Konas and to take the price of shipping out of the $50.

Just 2 days after I sent that email, a box arrived via Fedex, with 1 yard each of 9 colors of Kona. 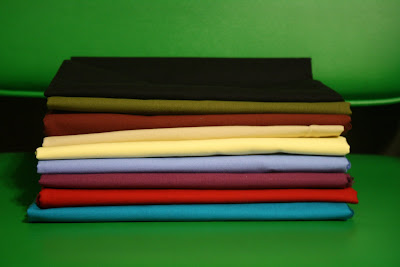 Kona retails for $6.99/yard, so that was $63 worth of fabrics, plus the Fedex shipping. I can't describe how that made me feel. First that they trusted a complete stranger, and second, that they were so completely generous. Who does that now days?

If I'm ever in Pennsylvania, I'll definitely be stopping in!

Which brings me to my new goals. Following the example given by Sauders, I will be showing more trust and generosity to strangers. But that isn't my main goal - the word I want to live by in 2012 is....wait for it....

I want to minimize my life, as in minimize the amount of 'stuff' we own. I'm going to cut it by at least half. My hubby would be happy if we each owned just 100 items. A shoe counts as 1 item. A pen counts as 1 item. Yeah not going to happen (have you seen all my fabric?!) but he is going to LOVE how much stuff disappears from this house!

So that's the plan!

I started off 2011 with two goals I posted about on here. One was to blog every day, and the other was to stitch something every day. I succeeded at the blogging, but failed at the stitching. I was doing really well until October when we had that freak snowstorm and lost power for 5 days! Stitching just went out the window and has been quite sporadic since, so I'm not going to make that goal again!

I am still going to blog, just not every day. Look for posts from me 2-3 times per week. I'm looking forward to not feeling the pressure to say something even if I have nothing to say! Hopefully they'll be more in depth too.

My big quilting related goal for 2012 is to finally publish some patterns I've been working on. I have the drawing software all figured out (finally!) and need to get moving on that. So watch out for that at some point, along with a new name and new blog location! But for now, things are staying the same.

Once again, thank you SOOOO much for your support this year. See you next year!

Have loved your posts and learning about your life! Hope the new year is a very happy one for you and BTW-good luck with minimalising ( I have tried so many times but have conceeded that I am just a bower bird ) cheers teri

I have shopped at those shops you mentioned in PA, they are very nice there. How kind of them to send you the fabric! Have a Happy, joy-filled New Year,

Nice story about the store.

Cutting down is a good thing. Last week we cleaned out the pantry. We made a sweep of the house yesterday and took a carload to the thrift shop and listed a few things on freecycle. Today we made a major dent in the garage and have another carload to donate. Where does all this stuff come from???? :-)

I have been amazed that you were able to keep to your blogging goal (Wow)-- and was sure I'd remembered that there was a sewing goal as well! What a great commitment. A story with a happy ending and more lovely fabric for you :-) Happy new Year from soggy New Zealand!

Hey sweetie, it's been fun reading your posts. Mmmm, minimizing - good on you, I think the only thing I'm ready to minimise is me!!! that's my one goal for the year ; )
Happy New Year, may it be a good one for you and yours xx
hugs - Miche'le

Congrats on reaching one of two very big goals! I can't say that about my own year! LOL
I like that you and R are gonna try for the minimal life but it's a good thing that you aren't married to Howard as he thinks I am giving away his precious when I mention that something isn't needed or useful any more! LOL

Congratulations on meeting your blogging goal, it was a big one and you did it! I really enjoyed watching the evolution of the fruit applique project. Look forward to your future patterns because of it!

A Happy New Year to you and many more met goals!!

A woman after my own heart! The best tool I found is "freecycle" - it is a yahoo group for giving away your stuff. You might have one in your area. Just post it, review the responses, pick who to give it to, and out to the front of the house it goes! Keeps stuff out of your house and out of the landfill. Good luck!

Congratulations on 365 blogposts for the year! That is really a big task completed.
Lovely fabrics you got!
Good luck with the "minimize" resolution. Keep us posted.
HAPPY NEW YEAR!!!

Alright, first off I've been to Zooks and Sauders many, many times and they're just like that in Lancaster. Someone once told me that he was lucky to grow up there because there are just more spirits of kindness levitating in the air in Lancaster County PA. And it's true. Everyone will talk to you. Everyone smiles. And all the fabric is always $2-$3 cheaper or yard, all the time. It's often what was out 6 months to one year ago, but hey, Kona is Kona! AMH and Amy Butler,, batiks, Kaffe Fassett, who cares how old it is? But second, you are my idol girl! You did that thing!! Blogging all year. I loved every post. Now to minimize. Kindred spirits again! My curb currently had 22 industrial sided black trash bags with crap removed from my basement, family room and, GASP, my studio!! Great minds and all that crap, right?? It feels so good to have less. My mind is freer to create. And I feel like I own my stuff, vs it owning me. Onward to my bedroom next.

Hey, am I allowed to write novels on your comment section?? Minimize!! ~a

ps. We WILL no to Zooks and Sauders next time you come to DC. It's just 2 hours away.

Oh you don't need to thank me for reading your blog....I absolutely love your work and your passion...I've yet to not smile when I read your posts.

I too have been downsizing because the more you own, the more it owns you. It feels so darn good to purge all the excess...and believe it or not it is easy to find things to pass on.

I'm looking forward to seeing your patterns, I know they will be fun and inspiring.

As for people trusting others...I've always done that at IHAN and I'm telling you it still surprises me how shocked people are when I believe them. Isn't that sad? I think that if someone cheats me...they needed it worse than I do and I'd have just given it to them had they asked.

Your Kona's are beautiful and I'll be sure to stop into their shop if I'm in the area too.