Thank goodness it's over! 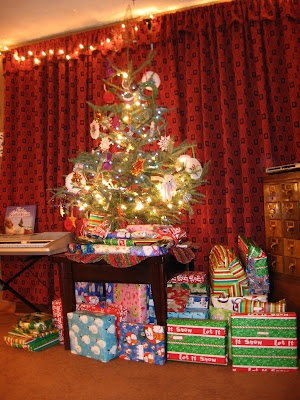 Phew Christmas is done done DONE for another year! It went very smoothly but I think I was mentally wound up more than I thought and for the 2 days after I pretty much stayed in my PJ's and relaxed. It was nice to think about and do nothing after all the Christmas hustle and bustle!

So here are a couple of pics of our Christmas. When you see the presents under the tree in the photo above, keep in mind that my hubby was working until 12 noon Christmas Day and how hard it was for the kids to keep their hands off the pressies until he got home! I pushed as many as I could way under the table. They were very good, and unlike last year we didn't have any snuck into the bathroom and opened. Yes that did happen last year and I have the video to prove it!

My daughter was in bed on Christmas Eve and had to jump out because she wanted to put a stocking she had made in school in the basement next to the woodstove - that we never use - because she knew that Santa would enter the house via the fireplace and as she said, "sometimes Santa puts presents in stockings". I think she wanted to make sure all bases were covered. I don't think many were going to fit in the paper stocking she made (on top of the stove) but Santa was able to get some goodies in their real stockings. This kept them busy until Daddy got home at noon. 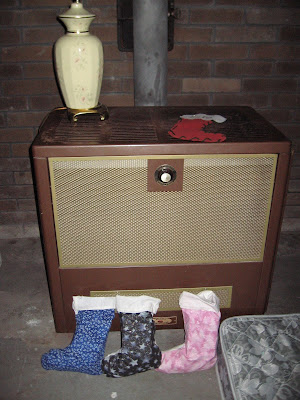 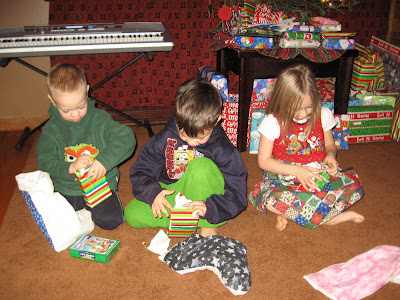 My daughter with her haul (thanks Aunty Rachel!!). The only thing that 'Mum' got her instead of Santa was a sewing kit - she was really hoping for one and was so excited that it came from Mum! It's the big rounded box right in front of her with the flowers and handle. I filled it with all sorts of goodies from Joann's. She has already raided my quilting stash and has been making pockets for everyone she knows. Yes pockets. A strip of fabric folded in half and sewn on 3 sides. Any ideas on what I should do with my pockets?! 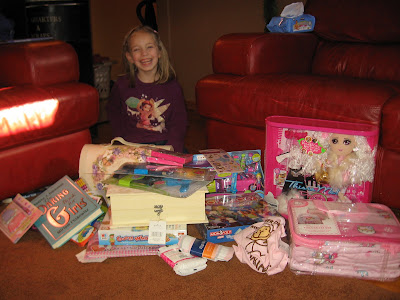 Stick all your blessings in them! the pockets that is. I can tell you have many! May 2008 bring you many many more! XXOO
Marie
http://journals.aol.co.uk/mariealicejoan/MariesMuses/

Hi Joanna,
Thanks for also dropping by my blog and leaving your link - your blog is lovely, so homely! You have such beautiful children - their little faces opening the mountain of pressies ha.
Thanks for adding me, I'll look forward to reading more of yours and adding it too!
Happy New Year to you and your family. P.S. I'll get some more shots of NZ soon once we go camping later this month :-)
Debra

Sounds like you had a wonderful holiday! Your kids are just so darn cute. :)