The cat came back... 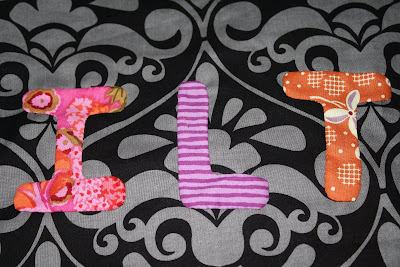 First order of business - I worked on my applique word "quilt" today - I only have 3 letters done, but this isn't a race, more of an enjoy the process experience!

And since this post would be pretty boring with just that to show you, I thought I'd tell you a story. In June of '09 we went to the animal shelter and adopted two cats, brothers. Mittens, an overly friendly black tuxedo cat, and Scotchie, a very sweet but skittish white and orange boy. After a couple of weeks Scotchie escaped outside and spent the next few days sitting by the back shed. He'd come into the garage during the night and eat food I left out for him, but then he stopped even doing that and we presumed he had died of starvation under our shed.

So that was the end of that. Until last Monday when I received a call from the shelter saying they had our cat Scotchie and when would we like to pick him up?! I just about fainted - I said something like are you sure? We haven't seen that cat for 1 1/2 years! So in we go, me expecting to see a skinny, mangy, flea ridden wild cat. Instead there was Scotchie, fat, happy, and not a flea or tick to be found!

He has settled into life with us very well, but is a bit wary of the children and comes out when they're not around, but when he does come out, he's the most affectionate cat I've ever seen! We had to wonder what had happened to him all the time he was gone, and why he was so big and healthy?

In an amazing coincidence, some of the mystery was solved last Thursday when I went to visit someone who lived on the street he was found, to deliver some late Christmas cookies. She lived in a ground floor apartment and had 4 cats, so I told her the story of our 'found' cat, who happened to be found on her street. She said, "He's white and orange isn't he?" Amazed, I said yes! She said, "Oh I've been feeding him for over a year, and so has everyone else in the apartments. He's very friendly, isn't he?" Once again, I just about fainted! All that time, Scotchie was having the time of his life, being fed by numerous people and getting all the cuddles he could handle! No wonder he didn't come home! The street is about a 5 minute drive away, and over 2 very busy streets. We think he and Mittens probably lived there before we adopted them. Who knows?! But we are happy to have him home, and he and his brother have picked up right where they left off, playing in the hallway late at night, and licking each other. Does he look malnourished and wild to you? I think not! 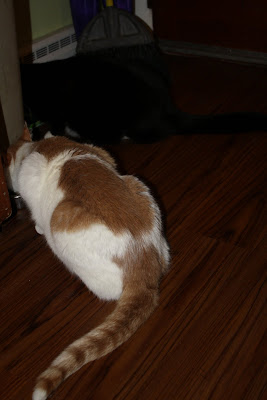 Moral of the story - microchips in pets actually work!
Posted by Joanna at 10:06 PM

OMC = Oh my CAt!! That is simply crazy. And no fleas? Pretty civil and decent? Amazing....~anna ps the background on the quilt, ahh, perfect choice.

I love stories with a happy ending!