Once again, I have the same quilting related goal I made two years ago, and that is, to stitch something every day. The first time around I lasted until about May and then fizzled out. Last year my goal was to make a mini quilt a week. What a bust that was! I didn't even do one per month!

But it's a new year and I have new resolve. Not only do I want to stitch something every day, but I want to blog about it every day as well. Yes this is coming from someone who finds it easy to go for more than a month without posting! Others have done it, and so can I!

So to start with, I want to show you two things. First up are presents I made for our kids for Christmas.

At the beginning of December I got the kids to draw a picture of what they thought a monster would look like. Then I spent the next couple of weeks recreating them in fabric. And when I say recreate, I mean as close as I could to the original drawing, including different size arms and legs, or 7 nails on one foot and 5 on the other.

My youngest boy's was pretty simple and only took a couple of hours. My daughter's was a little harder and took about 3 hours. But my middle child's - oh my! He had 4 arms on that monster of his, and antenna, and the arms and legs weren't any kind of normal shape. My mind was spinning! Needless to say, his took longer than the other two combined!

But I did get them done in time for Christmas and they were SO surprised when they opened them! It was definitely worth the effort when I saw the look on their faces! They have been sleeping with them every night and they have plans for more pictures. I think I'll try to put that off for a while though!

First, here is my youngest with his purple monster with 24 legs and as he says, a thousand eyes. He always picks rather odd names for his toys (like "Maybe" the the Lion) and as such, his monster was named "A Million"! 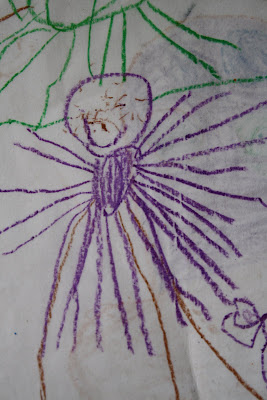 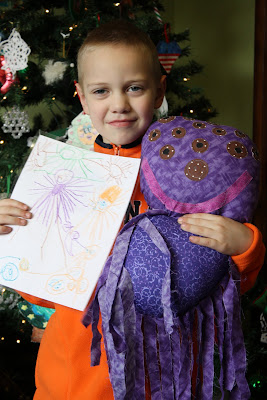 Next is my middle boy with his pain-in-the-rear-to-make monster called, "Mr Monster" 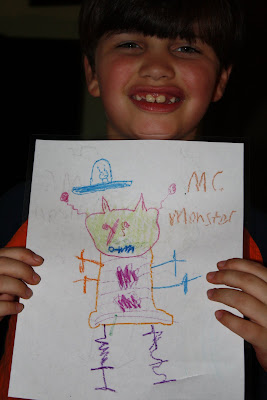 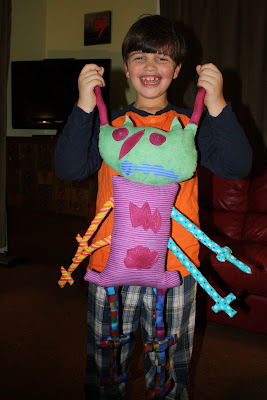 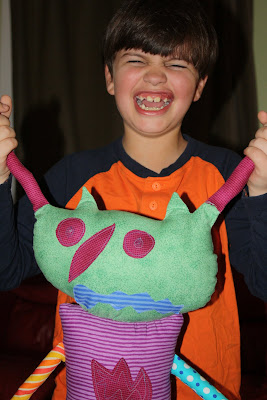 And my oldest with her mushroom-top monster that she has named, "Mrs Mush" 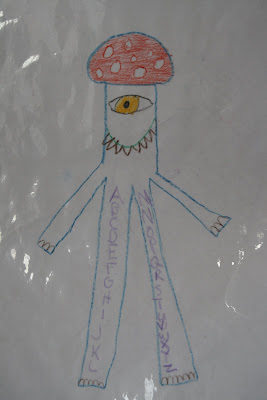 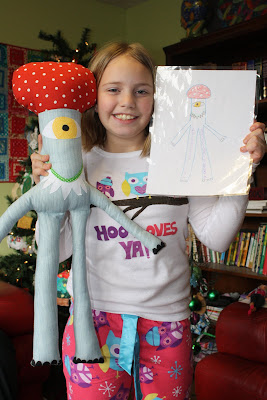 As for sewing today, I started off the year by making chair covers for the Primary organization at our church. This involved sneaking a chair out of the church yesterday so I could use it at home to make sure the covers fit properly, shopping for some cheap but sturdy fabric, and then deciding that making and fusing fabric names was just going to take too long and that fabric paint would work just as well in a tenth of the time! They have the names of the 7 classes on them so the children know where to sit each week. 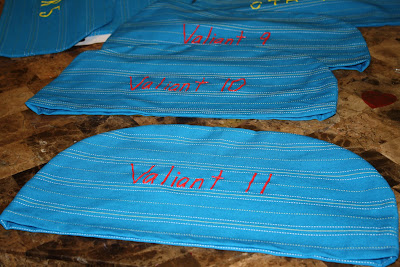 I also made matching tablecloths. Phew that was a lot of sewing today! But at least it is done, and they can be used for years to come.

I think some nice quiet handwork might be the order of the day tomorrow!
Posted by Joanna at 6:58 PM

Your goals make me laugh. I just posted mine. It seems so easy now.

Good Luck with your goals, Joanna!!
I love the pictures of the monsters your children drew... and the resulting softies - awesome one!!

What a wonderful idea! I love the whole project!
I did the chair covers for our primary earlier this year. Fabric paint is a good idea, but I never thought of that. I ended up making iron ons with the computer. Nice to have them all finished, isn't it?

Joanna- those monsters are ADORABLE! I LOVE this idea! You should get this published. And the primary items are awesome too - very useful!

I made monsters with my kids one day too! I let them draw them and then I made them out of felt. My son's was the hardest with the fire hand! Yours turned out AMAZING!

The monster drawings turned into dolls was a wonderful project. I may try this with my two little grandkids. Thanks for sharing!

OMG your monsters are so fabulous. What a creative and fun gift! Hats off to you.
Wow, you're sew busy!
Happy New Year!

I love those gifts you made the children...wow - so creative!