I received a call out of the blue from a friend on my street. Her mother had decided to have a big clear out of her fabric, and took it all to my friend's place. She took what she wanted, then called me to come and take anything I wanted. I had no idea what to expect, but what I didn't expect was entire bolts of quilting fabric! 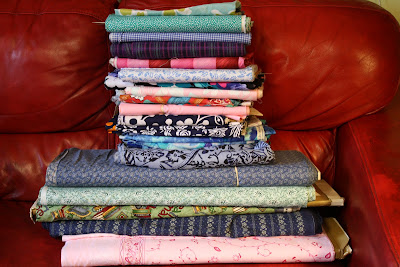 None of the fabric was the new modern stuff I like (other than a piece of Joel Dewberry Modern Meadow!) but there was a lot of good basic quilting cottons. The ones on the bolts are a little more calico-y than I like, but I think they will make good quilt backings. And plus, how could I say no to entire bolts of fabric?!! That's 15 yards on each one - crazy!

So thank you Denise for thinking of me!
Posted by Joanna at 9:22 PM

I bought my fair share of non-modern fabrics back in the day and I've been given even more. A lot of them aren't my favorites, but they are great for charity quilting, backs, etc.

The bolts?!?! Wow! What quilter on earth wouldn't appreciate that? I get backs from the thrift store. Anywhere. And you know what ? Once it's all quilted up, I've never met a back I didn't like. Very generous of that lady. ~a

Ooh-- lucky you!! There's some nice stuff in there. My neighbor volunteers at the senior center 2 days a week and one of the ladies wants to get rid of her quilting materials--and she thought of me :0) She goes today, so i'll find out just what I'm getting (I have NO idea).
Enjoy your new loot!

Score! I know you'll have fun with all that fabric.