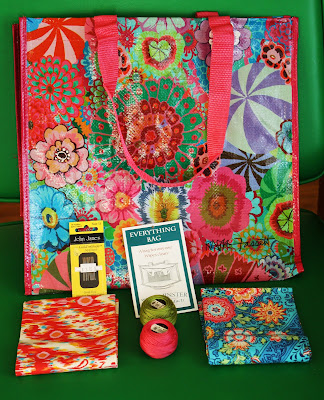 I went to a local quilt show today called A Quilter's Gathering. It's the local show put on in our town. It's not little, but it's not huge. It does draw some good teachers though.

I don't know why I expected anything different from the last 5 years I've gone, but I do tend to live in hope! The vendors...ugh. I hate to be negative, I'm usually a positive person...but even I have to vent once in a while!

I found one, just ONE vendor with newly released fabric. It felt like everyone was either selling masses of batiks (are batiks making a comeback? They were everywhere) or their older fabric from 3, 4, and 5 years ago. Even more surprising to me, the ladies were flocking to it! It wasn't even on sale. If I'm paying $3/FQ then I'm buying brand new released fabric, which is exactly what I did! Portsmouth Fabric Company had the brand new Amy Butler Lark line so I got a couple of pieces of that. They also were selling reusable totes so I bought a Kaffe Fassett printed one. The only other things I bought were a couple of Perle cottons and my favorite needles to use for needleturn applique, John James Gold 'n' Glide. 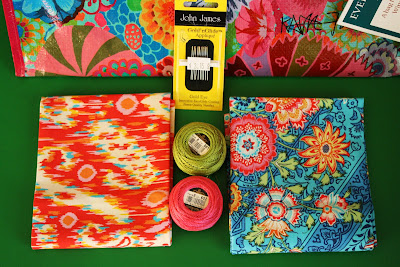 Tomorrow I'll post pictures from the quilt show itself. And I'll try to be positive, I promise!
Posted by Joanna at 4:05 PM

I was amused by your batiks comment. I am not a batik girl but almost everyone I know loves them. Give me a print any day!

You know I'm right there with you on fabric selections in this area. I always have high hopes...and end up seriously disappointed. Calicos are right up there with toll painting and pinecone art in my book.

I just bought some fabulous Australian fabric from Portsmouth.Love there fresh new looks

some friends and I went to a local "Gathering" which was advertised for quilters....everything there was already made! why would i want to buy someone else quilt? we took off and went to three local quilt shops, had a nice lunch and I ended up buying 3 yards of a beautiful turqoise solid...for $2 a yard!.. I also noted a ton of batiks out there...and I am NOT a batik person at all...just do not care for them..

One of our LQS owners told me batiks were her best seller. I have about 3 pieces in my sewing room. Yes, many love them and apparently they sell really well. Different strokes, right? I love Wanda's blog, http://exuberantcolor.blogspot.com/ and she uses tons of batiks. It's just not what I buy.

I love that fabric you bought ... I wish I had a decent store around here - I'm stuck with Joann's and Wal-mart. :-/

I thought the same thing. I ended up only buying batiks at the show because I'm building up fabrics for a specific batik quilt. I wished there was a bigger selection of newer and more modern fabrics.

You know I said I will never collect the batiks, they are no biggie. BUT I saw one pattern and had to have it and so off I went collecting batiks. So now I am doing another batik to use up the extras but I had to buy others to go with. UH OH I now have a bin of batiks. Sigh How Oh how did this happen. But I recently have picked up applique (needleturn) and I am going to go find your needles and try them. I have realized the needle DOES make a difference!